Our last blog was telling of the mishap of Jacky which was on day 42 of 100 when she severely cut her arm.  We are now on day 58 of 100 and a lot has happened since.

We are at 3695 km of riding for the trip.  We have had 5 flats, 1 broken spoken and 1 broken pedal.  It has been sunny everyday and has only rained 3 times for a total rainfall of one hour.  The temperature continues to be over 100 degrees most days but it is not as intense as what we had experienced in the southern part of India.

Jacky's recovery time in New Delhi kept her inside most of the time and out of the pollution.  Meanwhile, Jeff and I went to the Asian Wrestling Championship for 5 days (Jacky came a couple of times).  We saw tremendous wrestling and some future Olympians.  These are the countries that participated:  India, Iran, Iraq, Japan, China, South Korea, North Korea, Vietnam, Jordan, Mongolia, Uzbekistan, Kazakhstan, Kyrgzstan, and Tajikistan (never knew there were so many "stans").  It was strange sitting in a stadium amongst countries that have a lot of tension between them.  There was cheering but no trouble broke out.  Jeff, Jacky and I want to thank Brad Wicks and Pete Blodget for sponsoring our time at the wrestling tournament.
We started heading north to the border of India and Pakistan.  We made a stop in Ludihana to visit the Hero Bicycle factory.  They are one of the largest bicycle factories in the world and they sell more bicycles than anyone else.  It was very interesting, but Trek Bicycles in Waterloo, Wisconsin does things on a different level of quality. 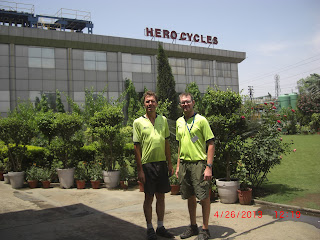 While in Ludihana we were interviewed by two different newspapers and made the news the next day.  "Three gringos are newsworthy??"  As we biked the following day we had people stop us and and say (in their best english),  "we saw you in newspaper".  We enjoyed a few minutes of fame.

Onto Amristar, the city of the "Golden Temple".  The "Golden Temple" is the religious mecca for the Sikh Religion.  The city was full of Indian tourists making their annual pilgrimage to the temple.


Amrisar is 30km from the Pakistan border.  We were told to stay away from the border as it was too dangerous.  You know us, we heard about the Retreat of Flags Ceremony of the bordering countries, "India and Pakistan".  This ceremony happens daily at 5:30 pm.  Three to five thousand Indians and the same number of Pakistanis gather in the stadiums on their respective sides of the border.  Cheering from both sides...who can cheer louder?!  Who can taunt the other side better?!  It felt like we were at a Packer/Viking football game.  The Indians even had a cheerleader that was getting the crowd all riled up.  The lowering of the flags was very formal and animated as the guards from each country taunted each other.  It had to be one of the weirdest government cultural things I have ever seen.

Video was taken prior to the actual ceremony.

Jeff had a bit of bad luck as he was pick pocketed at the Golden Temple.  He had his passport and billfold taken (not everyone at the Temple is holy).  Lucky for us we have skype and he was able to call and notify his bank and credit card companies.  The major problem is the passport.  He now needs to get to the US Embassy in New Delhi to get a new one.  We decided to go to Chandigarh ,which is enroute to one of our destinations, Shimla..  Chandigarh is the capital of 2 of the states and is a train hub.  This is a good spot for Jeff to take the train to New Delhi to get the paperwork started (takes 7-10 days to get a new passport).  Jacky and I will hang in Chandigarh for a couple of days until Jeff returns.  We will then all head into the Himalayas to Shimla and then to Luknow.  In 7-10 days Jeff will return to New Delhi to pick up his passport, Indian Visa and Nepal Visa and then once again take the train back to where Jacky and I are at that point and we will all head to Nepal.

The Decorah Time Trials were held last Saturday.  Jeff and I didn't want to miss out on the action so we held our own Indian Time Trial.  Jeff just nipped me.  Maybe we should have taken our bags off. 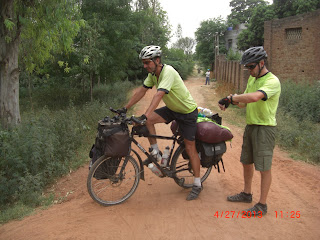 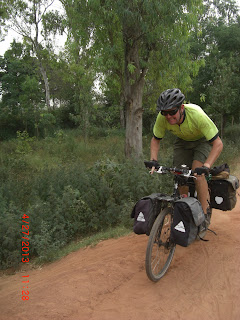 India is a developing country but they still have many things to work out.  They are still dumping their sewage and trash in the gutter.  55% of raw sewage ends up untreated and into their aquifers.


As far as Jacky's arm, Dr Jeff and Dr Ward removed her stitches using a fingernail and toenail clipper as a surgical scissors was no where to be found.  Rest assured these clippers were well soaked in alcohol prior to the procedure.  She now wants to call me Dr Kovorkian.  The arm is healing nicely.  It just looks like she has a big centipede on her arm.

Stay tuned for some upcoming beautiful pictures of the Himalayas!

Hey, a tatto idea, it looks kind of like a bike chain. Do that!

I had suggested a tattoo of a road map of your travels!
See you soon!