Into Norway and Sweden

We made it across the north sea and into Norway. Oslo and then to Lillihamar and now into Sweden. About 60 miles a day. Camping along side the road or in yards.
Two nights in Lillihamar at Maureen's house.

Some rain and lots of hills. Food and beverages expensive in Norway. Sweden is more reasonable.

pictures to come.
Posted by Ward and Jacky's Adventures at 1:48 AM 1 comment: 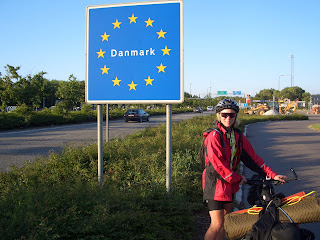 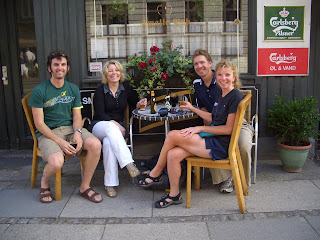 We traveled from Berlin to Copenhagen starting Friday, July 13 and arriving in Copenhagen on July 20. The weather started out rainy, then turned hot hitting high temps of 106 degrees F, then cooled off with strong winds and ended with sunny skies and a tailwind into Copenhagen. Our daily mileage has varied from 50-80 miles a day. It has been dependent on the weather. We have noticed alot of differences between East and West Germany and then of course, in Denmark. We are currently shacking up with our friend Tim Staton (from Madison) in Copenhagen. Lovely but very expensive city. Examples: gas $8 per gallon, Big Mac $15, 1# of ground beef $10, one night in a hostel $120. Needless to say we are not eating out. Please see the photo gallery for photos since we went overseas. They may not be available until Monday (we are emailing them to Kay and she's probably busy biking today - Sunday). Also, please sign up for the e-group and check past e-group messages where you will get a more detailed description of our adventures. The picture on the home page will be changing periodically. Try to guess where we are sitting.

Map our route!
Posted by Ward and Jacky's Adventures at 11:50 PM 1 comment:

Touring in Germany with Ross

We (Ward, Jacky and Ross) flew into Frankfurt Germany on Wednesday, July 4 and travelled to Aschaffenburg where Ward´s aunt lives. On July 5th we travelled to Munich and flew to London. We saw the changing of the guards at Buckingham Palace, the Horse Guards, Big Ben, the Parliament, Tower Bridge, the location of the Prime Minister's home, the London Eye, MI6 (security building for the city and, according to Ross…one of the locations for a James Bond film), Harrod's, the set up for the prologues and the Tour de France opening ceremony. It was very expensive: $2.19 US = 1.00 pounds. Then flew back to Munich. Visited the Hofbrau Haus, Eagles Nest (Hitler's Hideout) in Berchtesgaden, and the Congress Hall and Stadium in Nürnberg (where Hitler said his speeches, etc). It was very interesting and eery at the same time. Returned to Aschaffenburg. Ross flew home today. We plan on heading north on our bikes on Thursday (suppose to rain tomorrow). Please see the e-group for a more detailed description of our travels.
Posted by Ward and Jacky's Adventures at 7:21 AM 1 comment:

We finished the GRABAAWR on Saturday, June 30th. We rode ~500 miles through WI. The scenery was beautiful, the weather couldn't have been better and the company was a hoot. We had our last going away party Saturday night in Madison. It was called "How can we miss you if you won't go away." We are now in Minneapolis completing our final packing...or should I say "elimination process." We fly to Germany tomorrow. We are having a little problem downloading pictures but will hopefully have that problem rectified soon. Please bear with us. More to come. Please see the e-group for a more detailed description of our trip so far.
Posted by Ward and Jacky's Adventures at 4:04 PM 5 comments: