Top of the World! Mount Everest and Kathmandu.


These crazy guys saw and touched the top!  Scott is from the United States and he summitted from the Nepal side. Scott lost 30# due to the climb.


Chris is from Australia and he summitted from the Tibet side.

We met them last night when we were having some drinks.

Kathmandu:
I (Jacky) wanted to spend more time in Pokhara so Ward and Jeff mounted their bikes and headed to Kathmandu.  During their 2 day ride they experienced rain, narrow winding mountain climbs with heavy traffic and flooding once they hit Kathmandu.  The water drains are full with garbage which prevents them from adequately draining.  So, when it rains there is typically flooding in the streets.  Ward and Jeff experienced this when they had to ride through 9 inches of water once they entered the city of Kathmandu.

Two days later I took the bus to Kathmandu and met Jeff and Ward.

Jeff went to the Indian Embassy to get his visa on Friday but was told he will  not be able to pick it up until 5:00pm Monday.  Therefore, we have 4 days to explore Kathmandu.

We walked around and saw temples, stopped at a local festival, ended up an International Wrestling match (WWF, raw), etc.  See pictures below. 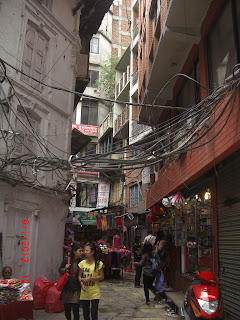 This is a typical road in the Thamel area (tourist zone) of Kathmandu.  The roads are narrow and outlined with many various little shops. 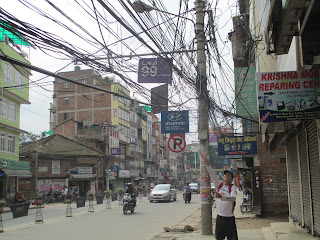 They haven't figured out their wiring system yet either.  A young lady was electricuted the other day when she stepped on a live power line. 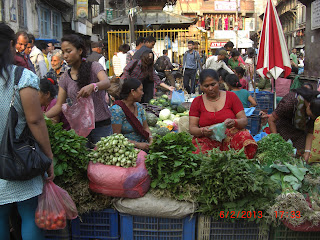 Fruits and vegetables are purchased daily at the markets. 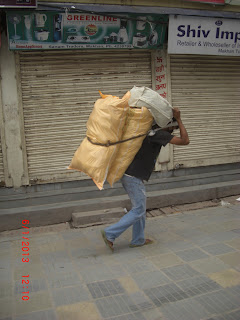 Its a chiropractor's nightmare.  No item is too big to strap on your back and head. 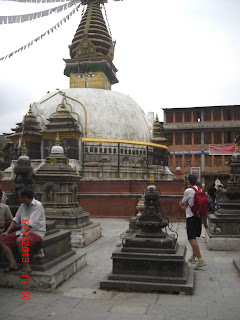 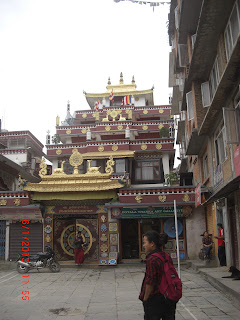 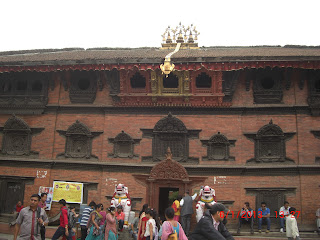 The diety lives in this building.  The diety is a girl that has not reached puberty yet and that they believe is a God.  Once she reaches puberty she is replaced. 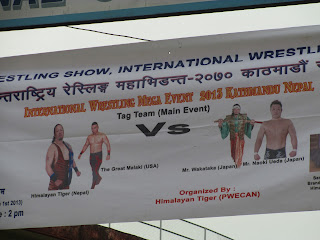 We went to see a soccer match.  It was half time and we heard a lot of yelling and cheering coming from a different building so we went to check it out.  It was an International Wrestling Show (WWF, raw). 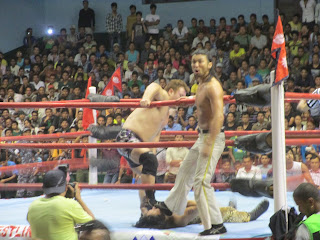 It was Nepal and USA  vs  Japan. 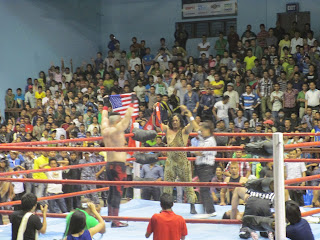 Thank God the Nepal and USA team won.  Its a scripted match but the fans were taking this very seriously and getting a little out of hand at times. 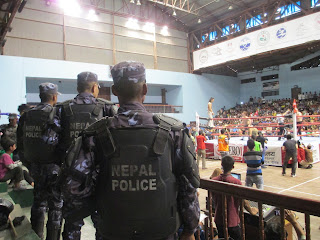 There was an extraordinary amount of  riot police present.  At one point a Japanese wrestler had the Nepal wrestler in a headlock and was strutting him down the front row of the bleachers right in front of us.  A local from behind jumped over  my (Jacky's) back and hit the Japanese wrestler.  The riot police were right there and escorted the kid out. 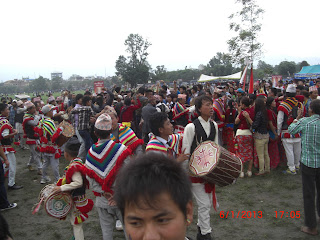 We also attended a local festival.  We never see any other tourists at any of these events.  They all stay in the "tourist" zone.

We had heard a lot of negative comments regarding Kathmandu prior to our arrival.  Much to our surprise, we enjoyed the city.

Tomorrow we hit the road and bike through the mountains to the Indian border.  We are in our last week.  We will send one final blog prior to departing on June 12th.

Until then...Namaste!
Posted by Ward and Jacky's Adventures at 4:45 AM