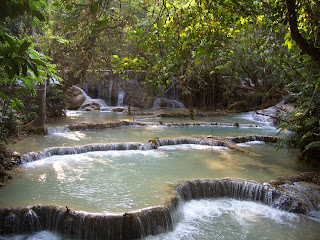 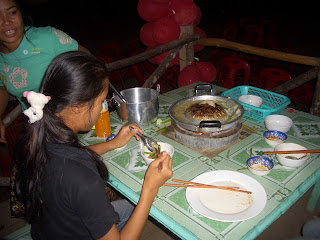 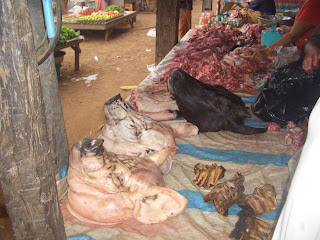 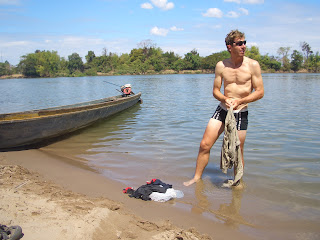 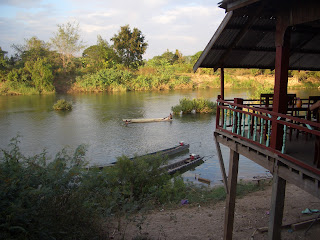 As we biked through Laos we experienced both the bigger touristy cities like Ventiene, Vang Viene, Luang Prabang, and Phosavan as well as the very small villages that only had one sketchy guesthouse.

While in the bigger cities we would stock up on supplies and food. Bread, cheese and peanut butter are pretty scarce as well as deodorant, etc. We would also try to use the ATM and obtain as much money as we thought we would need until we got to the next large city with an ATM. When we reached Luang Prabang, which is the largest tourist city in Laos, we were sure they would have an ATM. They had 4 actually but none of them had been working for the past 4 days. Tourists were lined up trying to get any kind of money since they also found themselves in a pickle. We traded in the US dollars that we had. That bought us a little time but they had no idea how long the ATMs would be down. We couldn't leave the city without money because the next ATM might not be until we reached Vietnam since we were crossing over the northern Laos mountains on bicycle. We downgraded our hotel and ate rice and bread. We were ready to sleep on a tarp if we had to. After a total of 7 days being down the ATMs finally worked. Hurray! We can now head down the road.

We did visit Don Det Island in southern Cambodia. Everyone said you had to go see it so we went and stayed for 2 nights. Again, we stayed in bungalows but this island was like a little village. Our bungalow was only $3.00 total a night. Food was just as cheap. We met alot of other travelers on the island and had a nice relaxing time.

Photo with the girl eating at the table: the clay pot is full of hot coals and sitting in a hole in the middle of the table. You cook your food yourself over the pan that sits on top of the clay pot. This is very traditional way of eating.

Other typical grilled street foods were rat, snake and dog.
Posted by Ward and Jacky's Adventures at 1:05 AM