Trip to the Emergency Room

The Sink fell off the wall.

Monday April 15th  we had good day of riding.   Our 110km day from Agra to Mathura included a few stops at historical sites, some strong headwinds and temperatures only at 113.  We had some good fortune in finding a hotel for 1050 RS.($21.00)   We were tired and just needed some rest and a bit of air conditioning.

Jacky decided to take a  quick shower in an effort to wash away the road grime, air pollution, sweat and sunscrean from the day.  This is when everything went awry at 7:30 p.m..

First I need to explain how an Indian bathroom is designed.  They are all tile, no shower curtain and they have one common drain.  The shower head normally spews water over the entire floor.  Hopefully the drain is at the lowest spot on the floor.  ( Are you getting the picture?)

Jacky was finished with her shower and  was drying herself.  She used the sink to balance herself so she would not slip on the totally wet floor.  This is when all “hell” broke loose.   I did not mean to swear,  but the porcelain sink broke away from the wall and crashed to the floor.   (The rusted brackets were  paper thin.) Jacky slipped and fell on the broken chunks of porcelain sink.  Her right bicep was cut  badly.

Jeff and I heard all of the ruckus.  Jacky was able to unlatch the door and let us in.  I do not want to sound crude or gross, but imagine walking in, to find your wife bleeding profusely from a 7 inch gash in her right arm, sitting
in a pool of blood and water.  Jacky fainted as I was trying to help her stop the bleeding.  (Remember the shards of the sink were everywhere.  It looked like a scene from a horror movie.)

What to do first?  Stop the bleeding or wash the wound with filtered water so to prevent infection.   We did everything all at the same time.  We washed the wound, stopped the bleeding, and put some clothes on Jacky.

The hotel staff got us a pedal type rickshaw to go to an emergency room and they accompanied us as well.   Jeff ran along side the rickshaw for moral support.  Jeff filled out the hospital paperwork as they took Jacky into see a doctor right away.   He said a visit in the emergency room required less paperwork than getting a room at a hotel!  I was able to be with Jacky while they cleaned the wound  and numbed the gash and put in 9 stitches. (The scar will not be very pretty.)  (I thought I was pretty tough but the cleaning and stitches  made me light headed.   Not much support for Jacky.)

Indian hospitals must have an open door policy.  While they were stitching up Jacky,  a young boy walks into to see his mother who was an attending nurse.   The hotel worker was also in the emergency room.   The doctor and attending nurse used gloves but no masks by any one else. So much for keeping out any germs.

The cost for the emergency room and doctor was 1000 RS.($20.00)  I took Jacky back to the hotel and Jeff went on an antibiotic run with the help of the hotel staff.   That turned into a 2 hour event.   The drugs and supplies were 650 RS. ($13.00).   I am now responsible for giving  Jacky antibiotic shots twice daily.   I will never make a good nurse,  needles and I are not friends.

We took a truck taxi from Mathura to New Delhi because Jacky will no be able to ride for a while.   Coincidentally,  we had planned on being in New Delhi for the Asian Wrestling Championships, April 18th to April 22nd .    Jacky will heal her arm and Jeff and I will go to the wrestling tournament.   Our next challenge will be keeping infection at bay.   Thanks to Doug Burks (Pharmacist at Winneshiek Medical Center in Decorah) for informing us what the drugs are that Jacky is taking as education at the Pharmacy was not existent. 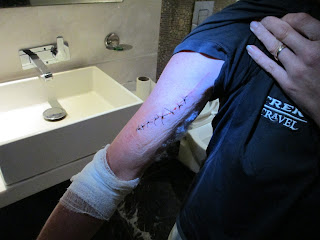 Posted by Ward and Jacky's Adventures at 6:34 AM

Oh Jacky! What an awful adventure that must have been. Please do take precautions with infection. My Indian visit to the doctor with another sick friend included taking my temp and then immediately using the same thermometer straight from my mouth to of my friend. Ugh. Thinking of you in Decorah and glad you are healing. May the good parts of the adventure continue!

Oh, what a bummer, Jacky! I feel for you. So sorry that happened! I hope all heals well, and that there is no infection. Take care and be safe while you heal! Love, Dom

What a scary part to your adventure! Take good care of yourself Jacky and give yourself plenty of time to heal. You are very brave. Sending prayers and hugs to all of you.